(I may earn a small commission on the products linked to in this post.)

Many people have allergic shiners, especially kids, and they are usually ignored.  Parents will say “my child is tired” and adults will claim “it runs in my family”.

These statements ignore the fact that there may be an underlying health issue.

In this article, I’ll share how allergic shiners can be an indicator of sinus health.  Most people deal with sinus congestion at some point in their life.

It could be from a cold or seasonal weather. It could also be from allergies.

My allergic shiners were chronic and they became my “normal”.  I accepted that they were part of my appearance instead of examining why I had them.

Once I discovered why I was getting allergic shiners I was able to treat the cause and get rid of the dark marks under my eyes.

Why Allergic Shiners Should Be Addressed

Unless you’re a medical professional, allergic shiners are a little-known symptom of allergies. I’ve often heard them be attributed to genetics.

Someone with allergic shiners might attribute them to family history or a late night out.

According to the Association College of Allergy, Asthma, and Immunology, allergic shiners are caused by the congestion of small blood vessels in the sinuses.

Due to congestion, tiny blood vessels are unable to flush out blood and other toxins. Once trapped, they remain in the sinuses and cause a dark, unsightly appearance.

The appearance of allergic shiners manifest in a similar way as someone who has been punched in the eye (the shiner will likely be less obvious than a black eye). The discoloration may be on the upper sides of the nose or under the eyes.  Their presence may look “natural”, especially if the person has always had them.

Allergic shiners are often mild and untreated, however, they are a perfect example to look for when diagnosing allergic disease and should be treated.

Allergic shiners are often seen in kids with allergies. If untreated, adults can have more stubborn dark areas between the nose and under the eyes. 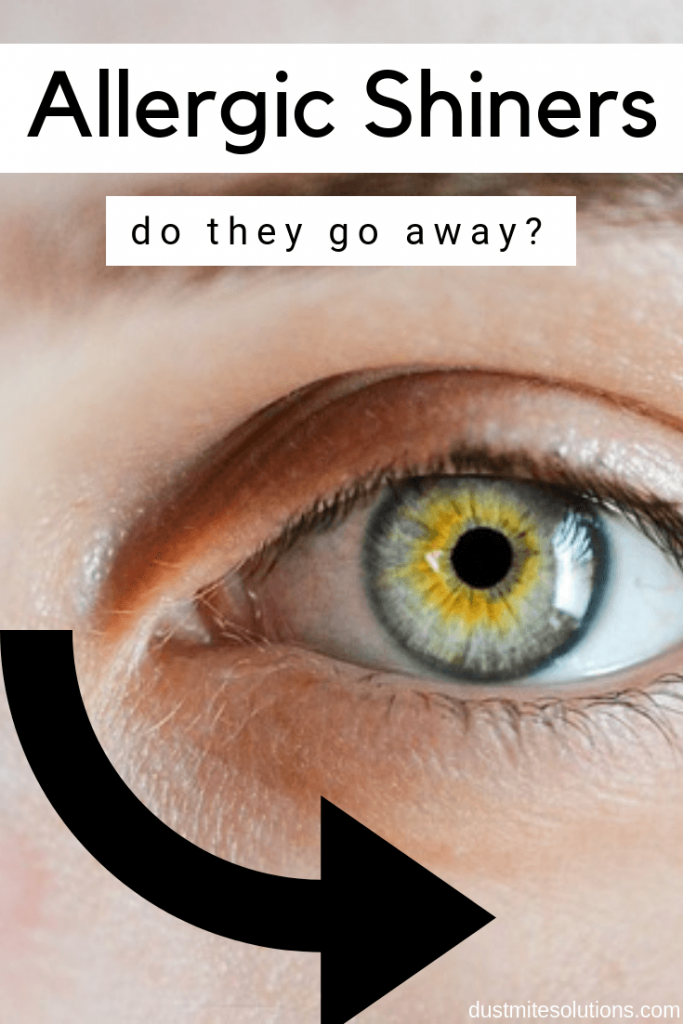 Allergic shiners often go untreated and it’s understandable to ignore a superficial issue. Kids are resilient and will push through allergy symptoms. Adults may have lived with the problem their whole life without realizing they are due to allergies.

Parents often see allergic shiners and attribute the discoloration to:

I grew up with undiagnosed allergies and had allergic shiners my entire childhood. In fact, I’ll never forget the time when a girl I liked asked me at my university why I had dark spots under my eye. She asked if I had been punched!

I went to the bathroom to look at my face. There was a slightly dark area under my eyes near the sides of my nose. I thought to myself “it’s always been that way so it’s not a problem”.

10 years later I learned that allergic shiners were just another symptom I had unknowingly ignored for years.

Allergic Shiners Will Go Away, If…

I was diagnosed with allergies and soon started allergy treatment. I wondered if my symptoms would go away and if my allergic shiners would go away.

Had I waited too long? Were they now permanent?

Within a few months of treatment (using allergy immunotherapy or allergy shots) my sinuses became less congested and my allergic shiners went away. I looked healthier and my eyes looked great!

1) If You Identify Your Allergy

I had allergies for years but I didn’t know what they were. The most important step for healing was to go to an allergist and get tested. The environmental allergy test is harmless, with no needles or injections involved.

Allergic substances are pressed against your skin and you wait to see if your skin reacts. If so, you’ll experience minor swelling or itchy skin.

I learned I was allergic to pretty much everything and asked myself why I hadn’t requested allergy testing years ago.

2) If You Decrease Swelling In Your Sinuses

After learning the cause of my symptoms my allergist and I developed a plan to reduce my allergen exposure, reduce my symptoms, and improve my immune system.

I realized that dust mites were a major cause of my symptoms and learned where dust mites live.

One place that was problematic was my bed. My allergist suggested I get allergy-proof covers for my mattress and pillows – this action helped reduce my sinus symptoms immediately.

I also invested in a HEPA air purifier that captured dust mite allergens from the air in my bedroom and cleaned the air.

These actions, combined with allergy immunotherapy, have decreased my symptoms and I no longer have those mild black eyes.

3) If You Get Some Sleep

The final step I’d recommend is to get some sleep. My allergic shiners were a sign that I had sinus congestion and that I wasn’t sleeping much.

I realized that due to my congestion I wasn’t sleeping well (this occurred for years). I’d sleep 10 hours and still wake up feeling and looking tired. I wasn’t getting enough oxygen while sleeping.

One of the reasons for my poor sleep was that I couldn’t breathe out of my nose. I was only breathing through my mouth at night and I wasn’t getting a good nights rest.

Allergic shiners will go away but it’s important to recognize the symptoms and take the necessary steps to improve. Allergic shiners are often overlooked because they are associated with our appearance.

Many people aren’t bothered by mild dark areas under the eyes and kids are too busy to be bothered.

Even though allergic shiners are a superficial symptom, they are a helpful way to recognize the allergic disease.

If you or your family experience allergic shiners be sure to keep track of their presence. Are they seasonal? Are they present year round? These characteristics could help you diagnose the allergen as well.

I didn’t realize I had allergic shiners until someone asked if I had been punched in the face. I just thought it was normal.

After being diagnosed with allergies and receiving the treatment I feel better and look better too. I sleep well, wake up energized, and people are no longer asking me if I’m tired.

Thanks for reading. I aim to share my experience with allergies to other people don’t make the mistakes I did. Having allergies can greatly affect your life and allergic shiners are one of the many symptoms to look for.

Be sure to check out my other articles and leave a comment if you have tips about allergies.

Deprecated: Directive 'allow_url_include' is deprecated in Unknown on line 0